Telling Versus Summary: or What the Brain Likes

Perhaps one of the first traps beginning writers fall into is the desire to “tell” the story instead of allowing the story to evolve through its scenes. It was one of the mistakes I made when I first started writing stories, and I’m sure it will be a mistake future novice writers will make as well. It is only natural for writers to want to explain everything as quickly as possible because that’s how we get the information across to our audiences.

It is the same mistake college professors make in trying to communicate their course content to their students. They look at their watches and determine they have only 90 minutes to explain the theory of photosynthesis. What to do? They lecture. Lecturing is a highly condensed method of passing along information as quickly as possible, but is it the most effective? Brain research concludes it is not. Students who do not participate in the learning process soon become bored and turn to doodling or texting. Deeper learning comes from students discovering the information for themselves. Does this mean professors shouldn’t lecture? No. But just lecturing builds few dendrites in the brain(Dendrite building is what we call learning). Our brains beg for us to be involved in the process of information discovery.
The same can be said for writing. Technical writers and writers of textbooks are basically “tellers.” Fiction writers must know how to have their audiences involved in the discovery process if they hope to keep their audiences awake. Involvement with characters is key to keeping the reader’s attention. Let’s take a look at two different approaches to the same event. Here, I’m borrowing an example from one of my short stories, <em>The Sorcerer.</em>

Tracy saw the seriousness in Mot’s face. He was never very good at hiding his emotions and most of the time it got him into trouble. She, on the other hand, had learned to love him for who he was, even if he didn’t know who that was yet. It was a shame he was so involved with his own self-pity that he didn’t have time to recognize how much she loved him and needed him in her life. (Rick Stepp-Bolling, 2014),

As you probably have guessed, this summarization or telling of the events condenses the action and time of the story. It’s also not very involving either from the character’s or reader’s perspective. Now let’s look at the same information but this time in scene or showing format.

There was a knock on the door. “Come in, Tracy,” Mot said.
The heavy door creaked open and Tracy stuck her head in.
“You sure it’s all right?”
“I should never have shut it.”
She saw the serious face he had drawn and said lightly, “What’s a magician without a few secrets up his sleeve?”
Mot’s mood did not lighten. “That’s not what I meant. I should never have shut you out.”
“Ah, what’s a sorcerer without an apprentice?”
“Now stop it.” The red came surging into his face. “This is important.”
“Self pity is never very important,” she said quietly.
His eyes caught her direct gaze, but he did not look away. The anger left him. “No, it isn’t much.” He smiled a shy, toothless smile. “But you are.”
She heaved open the door and came to him.
“Look out!” he yelled, but the warning came too late, and Tracy stumbled over the almost invisible pile of books. Deftly, Mot pulled her to the chair, but he found her laughing hysterically.
“Why is it I never seem to keep my balance around you?” she said between gasps. “Is this what life with you is going to be like?”
Her laughter left, melting into the room, spreading a warm, rich glow along the walls. (Rick Stepp-Bolling, 2014)

Notice some of the differences between the two examples? The most obvious difference is the use of dialogue. Dialogue creates action. It involves interaction between characters. It also keeps the reader involved in the story. But the use of <em>showing</em> also includes description, description that keeps the action moving and supports the dialogue. Can a scene be all dialogue or all description? Of course. But all of one thing or all of another is not very engaging to the brain and the brain is what you want your audience to activate when they are reading your story. A second difference between the two examples is the length. <em>Showing</em> takes more space, more writing. It shows the reader the events of the story as they are unfolding and, as a result, increases suspense. 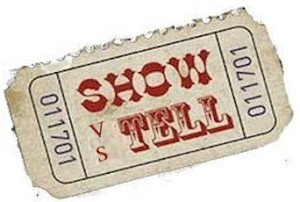 To summarize, in fiction writing, it is necessary for the author to be both a <em>teller</em> and a <em>shower</em>. Telling, or <em>summary</em>, allows the author to explain or summarize an event or series of events. Usually, this is done in past tense and condenses time and slows down the movement of the story. Components of telling include description and narration. Showing, or scene, is an event in progress. The reader doesn’t know what will happen next, so showing increases suspense and makes the story more intense. Components of a scene include dialogue and description. Telling will distance the reader from the story and can be used to bring out the philosophy of the story or as a transition between scenes. Showing increases emotion and reduces aesthetic distance.

Okay, so having given you this information in basically a <em>telling</em> format, can you guess what blogs are good for? If this had been a presentation, you would now be actively involved in the writing process so you could experience for yourself the differences between the two elements of <em>telling</em> versus showing in writing. But in the conservation of time . . .

Christine Marie Bryant is the founder of this organization. Without her vision, it would not exist. She started it through Meetup.com, creating it on December 31, 2009. I happen to have the dubious distinction of being the first member to join that meetup group. I wanted to start off 2010 by making a resolution to start writing again. On January 4, 2010, Christine posted three Meetup.com messages to me regarding the first meeting.

Christine started this group with the same concept we use today. In her first ever message to me, she laid out the concept (see image). She followed that up with another message which read: “As far as Agenda, I’m thinking .. 1) Introductions 2) a member reads 3) group gives feedback 4) another member reads 5) group gives feedback ~ so on and so forth”. Her vision was realized from the first meeting, and this format has proven successful. Our membership increased every year, expanding into other states and to other groups here in California. As the group expanded beyond the borders of the San Gabriel Valley, I had occasion to think back to the first CHWG meeting I attended, back in 2010.

When I walked into the small coffee shop in San Dimas, CA, I was welcomed by Christine personally, and by the rest of the group seated around the table. I had at that time, no formal critique experience, and I brought nothing to read. I just wanted to put myself into a situation where I was exposed to and could talk with other writers. What I experienced was so much more. I was impressed by the style of writing and the content of the stories that were shared that day. I did not read anything that meeting, but I did give my honest feedback to each writer.

Since that day, I have had many life experiences that prevented my attendance in every meeting. With the recent expansion of CHWG into Long Beach, I have the opportunity to join the group meeting every Wednesday night. Working in the LA/LB harbor, my two hour commute precluded any opportunity to make other meeting times. So I am very pleased to be back among gifted writers. And I count myself fortunate. I’ve lost count of how many fantastic people I had the pleasure to meet over the past five years through CHWG. I have enjoyed meeting them, and getting to know them better through their writing and critiques. I highly encourage anyone reading this to come join us for at least one meeting. You’ll be hooked. I promise.